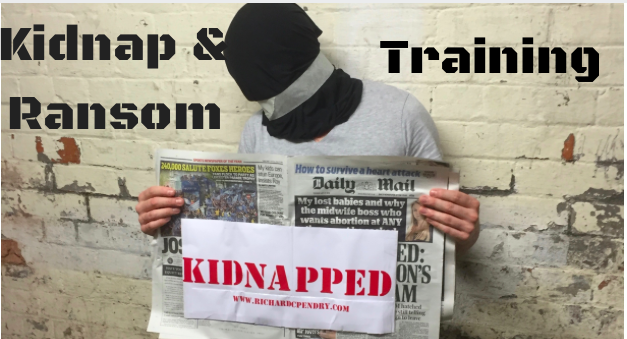 Recent events in Afghanistan in which another NGO worker was kidnapped,  prompted me to write an article for organisations working in an environment with a K&R threat, on how best to protect themselves. Carrying on with this theme. I’ve enlisted the help of Blue Cole, a leading figure within the field of Kidnap & Ransom Training, to talk about his company BC Global and the training that he provides.

Q1 : Can you tell me a bit about your background as to why you feel justified in being able to talk about kidnap and ransom, or to use its more commonly known acronym of K&R?

A1: I’d first like to state that I’m not very comfortable using the term K&R, as I find it misleading. I understand that it’s the name that’s been adopted by the security and media professions to describe the phenomenon, however in my mind it shows a naivety of what is a very complicated subject. I would have preferred the theme be given the heading of ‘Hostage Survival’ or ‘Conduct after Capture,’ as it allows for the nuance’s of the subject to be identified and dealt with. However, it is what it is I suppose, so we’re stuck with it. 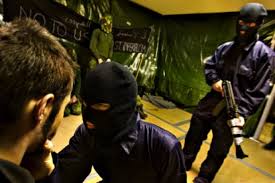 BC Globals training is as realistic as it gets

My involvement with the subject started in the military in 1995, when I began to learn a set of skills revolving around prisoner handling. These included: tactical questioning, interrogation, resistance to interrogation and conduct after capture. All pretty standard stuff for a military context.

A2: Since then I’ve worked extensively in the field of ‘Resistance to Interrogation,’ or ‘Conduct After Capture’ training as it has become known, for the British military, Norwegian and other NATO armed forces. The teams I’ve been involved with being heavily influential in altering the way that military formations broach the subject of Conduct After Capture.

Whilst working with the teams, I helped develop improvements to the training methods that ultimately became accepted across the NATO spectrum, and have been highlighted as a very important tool to aid anyone in captivity.

But I’ve just not trained the military; my clientele now lists a very broad spectrum which include: diplomats, media, through to business and individual travellers all of whom have benefited.

Q3: Have you seen a change in the way the subject has progressed since your involvement with it?

A3: Absolutely. During the 90s there was a big change in the treatment and categorisation of captives. A shift from the classic ‘Prisoner of War,’ over to ‘Hostage’ and ‘Detainee’ scenarios, as the bad guys realised how useful captives were for raising money – and by using them as human shields – protecting potential targets.

Q4: What have been the biggest challenges in taking this military form of training and adapting it to the civilian market?

A4: It’s trying to get the message over to be honest. After all, it’s a very emotive subject. There are some that don’t want to recognise that there is a problem at all, choosing to ignore it. On the other side of the coin, I hit the money issue. I’ll run you through the usual rebuffs.

‘Don’t worry, it will never happen to me.’ I’ve heard this so many times but do you know what? Virtually all the people I’ve debriefed have said that right up until their point of capture, they still thought that it wasn’t going to happen to them.

‘It is not relevant in my line or work.’ The hostage takers don’t discriminate I can assure you. If there’s money to be made, no one is safe. Take a look at some of the sectors that have been targeted: NGOs, media, service-personnel, police, holiday-makers, explorers & adventurers and back-packers. Its diverse, and being added to continually.

‘I don’t go to ‘high-risk’ areas.’ Define a ‘high-risk’ area today. Some areas are obviously more risky than others, but this can and does happen in the most unexpected places. Would a person going to the Olympics class Brazil as risky? I would, as the cases of ‘express kidnapping’ have gone through the roof in South America. For example; take the case of the Spanish Olympic sailing team, who were robbed at gunpoint in Rio last month.

‘The cost cannot be justified.’ This one gets me every time. I saw your recent article on Afghan Kidnap & Ransom and your mention of the Steve Dennis case with Norwegian Refugee Council. If that’s not a wake-up-call for justification then what is? Then of course there is the human factor. Giving the victim – and their family -sufficient training and the ability to deal with the potential horrendous psychological effects of being held in captivity, has got to be worth it?

‘It is too demanding for our employees’ If the training is considered too demanding for some of the individuals, then I would seriously look at the people you have chosen to work for you in these jobs or positions.

‘We do not have the time to train.’ Time is something that can be managed. Effective training can be provided if the value is understood and accepted.

‘Training will most likely not stop me from being killed’. The training will give you a certain set of psychological skills and coping tools to maximise your ability to assess, understand and adjust to time spent in captivity. It is often the attitude of the captive that influences the actions of the captors.

‘We don’t want to frighten our staff.’ If the threat of K&R is present in the area that an employee is being deployed to, then the employer is duty bound to ensure that the information is passed onto the individual. Not to do so would be unethical to say the least. If after receiving this information the employee decides not to go on the assignment then so-be-it.

‘We only need the training to qualify for insurance.’ This is one of the answers that I have less of a problem with, because at least someone in the organisation has identified the necessity for the training. I would always advise to accept and engage with the guidance on offer, ensuring that one gets as much from the person delivering the subject matter as possible. As it’s often the trainers empirical and contextual experience that will bring the training to life as it were.

Q5: That’s a good point to talk about the actual training that you provide through BC Global. Is it just yourself or do you have other instructors?

I’m the senior trainer, but I have a number of instructors that I can utilise to deliver my training almost anywhere in the world, in varied cultural settings, using all the main languages, and even with a choice of gender. They have all been closely vetted by myself because are after all, they’re representatives of my company. It’s taken me decades to build a reputation and I’m very guarded on whom I employ.

All my instructors are qualified and experienced in this specific tradecraft. All have attended and passed a precise course, have proven ability and competence in their chosen subject and undergone a lengthy probation period. There is no other specific instructor qualification known to exist outside the military. That being said, they are not all from a military background, but all have undergone a military education programme in the subject and are required to achieve a number of competences that must be attained and maintained. I ensure that they are regularly assessed which is a prerequisite for them working for me.

Q6: So what does the training consist of?

A6: I have different options in order to maximise what a client may require. The first is a brief, which depending on subject matter can take between 4 to 8 hours. However, I find the best results come from more intensive training, involving a lot more interaction. This includes the instructors playing different roles and situations that may present themselves during any captive situation. This delivery usually takes a full day, but depending on subject matter and the location, this can take several days should the client wish.

Q7: So are the students put under a lot of pressure?

A7: Remember what I said earlier. All my instructors are trained to a high degree and are adept at recognising stress in our trainees. There must be an element of pressure, but too much would hamper their learning ability.

Q8: What learning methodologies do you use?

A8: There’s a mixture, as each individuals learning technique is different. I’ve mentioned role-plays, but we also deliver via the other human sensors of: watching –visual and reading; listening – stories with real life scenarios and practical hands-on exercises.

The whole idea is to give the trainee information that they can access when they need it most – which by the very nature of the act will be at a very stressful time. Its called ‘stress inoculation training.’ A method tried and tested over the past 10 years to great effect. It consists of using the right level of stress to ensure that the information is retained and when needed most, can be drawn upon.

Q9: So does everyone use this technique? Is it commonplace within the industry? Who are your competitors?

A9: There is a lot of competition, I can assure you. Most of it comes in the form of hostile environment awareness courses (HEAT), that are run by ex-military guys. I’m not going to use them as punch bags. They do what they say on the tin – prepare you for a hostile environment, but few are qualified to the level that I insist on. The SF guys are trained in the discipline – I know because I used to train them – but that doesn’t make them subject matter experts and it certainly doesn’t give them the qualification that my people have. It is, and always has been, a very small pool of specialists who do this to a recognisable level, and we all know each other.

One last point on this; if you are looking for someone to deliver your training you should inquire about the background of the trainers. If they do not have the correct and credible qualification, the question is: should they be used? The last thing you need as a training provider with an instructor whose ego drives the process – someone who likes what he is doing, rather than enjoys ‘training’ the subject.

Q10: Thanks very much for this. It’s been very insightful on what is a somewhat covert activity. Before we finish is there anything else that you want to add?

A brief is just a brief; training is where skills are learnt. Train under a managed stress level and you will be able to operate under stress using those skills learnt. Training in this subject can be beneficial in other situations where stress and pressure is evident and can be ‘your key to survival’ if captured!

Our training concentrates of ‘surviving captivity’, however we do cover avoidance and more importantly recovery in all levels of delivery time will dictate just how much we cover, we do not like providing ‘tick in the box’ training!

If you experience that ‘gut-feeling’, then something is wrong, identifying this and having the necessary skills will enable you to avoid a potentially dangerous situation.